SMEs and the mega millennial shift

Demographics help us understand the world around us by analyzing groups of people defined by traits such as age, gender, occupation, annual income, education level, and more.

Demographics can also help companies understand their employees and the workforce at large. Today, small and big businesses alike could potentially have employees from a handful of generational cohorts employed at the same time. Generational cohorts are more specific groupings of people than just basing people on their age.

Currently, there are five generational cohorts that make up the workforce:

This age-diverse workforce has sparked conversations about how generational differences impact how businesses function and communicate.

An article from the BBC notes that the key difference between the cohorts can be described as “the different methods of communication they use. Where the silent generation and baby boomers had to rely on face-to-face relationships and are as a result more ‘engaged’ in their real-life communities, the younger generations have social media for that, and create their communities online instead.”

Younger generations have simply grown up with more technology from their earliest days, and in turn, feel more comfortable using it - and understanding it. In the 2020 B2B Buying Disconnect report from Trust Radius, it is noted that “59% of professionals who help purchase business software and hardware are millennials,” and that “Millennial buyers behave differently than older buyers in some ways.

This shows that different types of content will be sought out by millennials than by older buyers and emphasizes a shift from the established forms of communication to newer types of content, while also returning us to the premise of the right content for the right person and so on.

To look at the possible generational differences in values and preferences in the workforce and in how businesses communicate, Mono Solutions decided to get a better understanding of self-employed freelancers, who serve as microcosms of businesses as a whole.

To get more insight into the growing European freelance market, interviews were conducted in April 2021 with 553 full-time freelancers located in the United Kingdom, Germany, and Sweden. The report - Are freelancers the long-tail channel of the future? - by Localogy and Mono Solutions, was published in May 2021.

Key areas of interest in the study were the relationship between freelancers and software; how freelancers generate leads, create content and run campaigns; and the freelancer landscape, including demographics such as age, tenure, and type of work, as well as goals and motivation.

The report gives insight into generational differences among freelancers in the type of work performed, willingness to accept a job offer, whether financial and overall goals are being met, the ways in which freelancers communicate, and the type of content freelancers are comfortable creating on their own.

In the report, the freelancers surveyed were grouped into 5 age brackets, which roughly equate to the generational cohorts. The 18-34 age bracket includes Gen Z and the younger millennials, older millennials and those on the cusp to Gen X in the 35-44 age range, Gen X squarely in the 45-54 range, and with baby boomers (and the stray traditionalist) rounding out the remaining two categories consisting of those 55 and older.

Of the freelancers surveyed, 32 percent were 55 years or older, meaning that they are either a part of the traditionalists, baby boomers, or right on the cusp. The remaining 68 percent of freelancers surveyed belonged to Generation X, millennials and Gen Z.

When looking at the type of work freelancers do, there are generational differences. Older freelancers in the Gen X and baby boomer cohorts had greater representation in management consulting and accounting, where millennials and Gen Z gravitate more towards fields like marketing, software development, and virtual assistance. 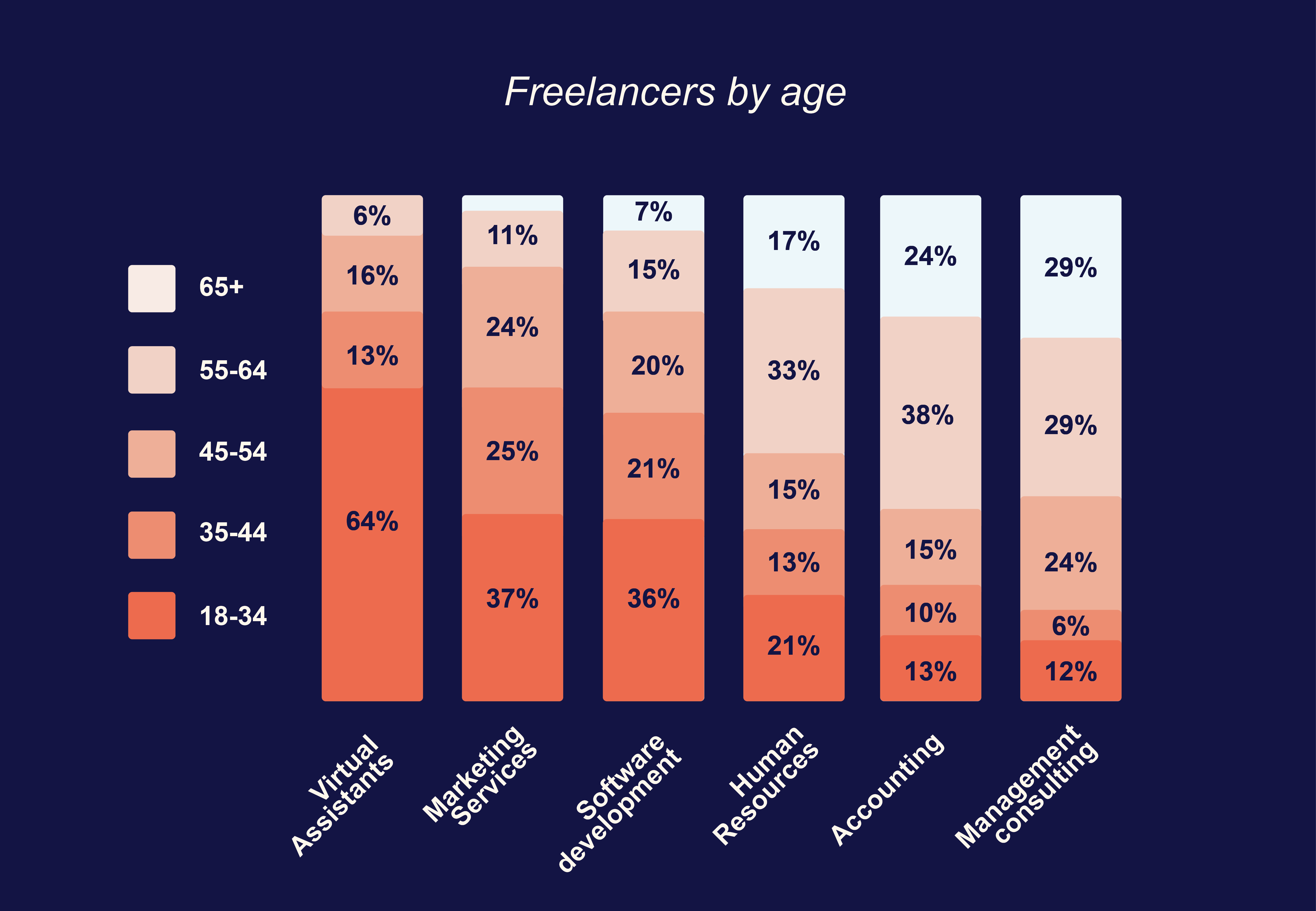 There are also generational differences between younger and older freelancers in whether they feel freelancing is meeting their financial and overall goals. Older freelancers, particularly baby boomers, tend to be the most satisfied.

That could also play a large part in why the baby boomer cohort of freelancers responded that they would turn down an attractive job offer (with 68% between 55-64 and 80% of those 65 and older saying no). Younger freelancers were much more split on whether they would accept a job offer or not. 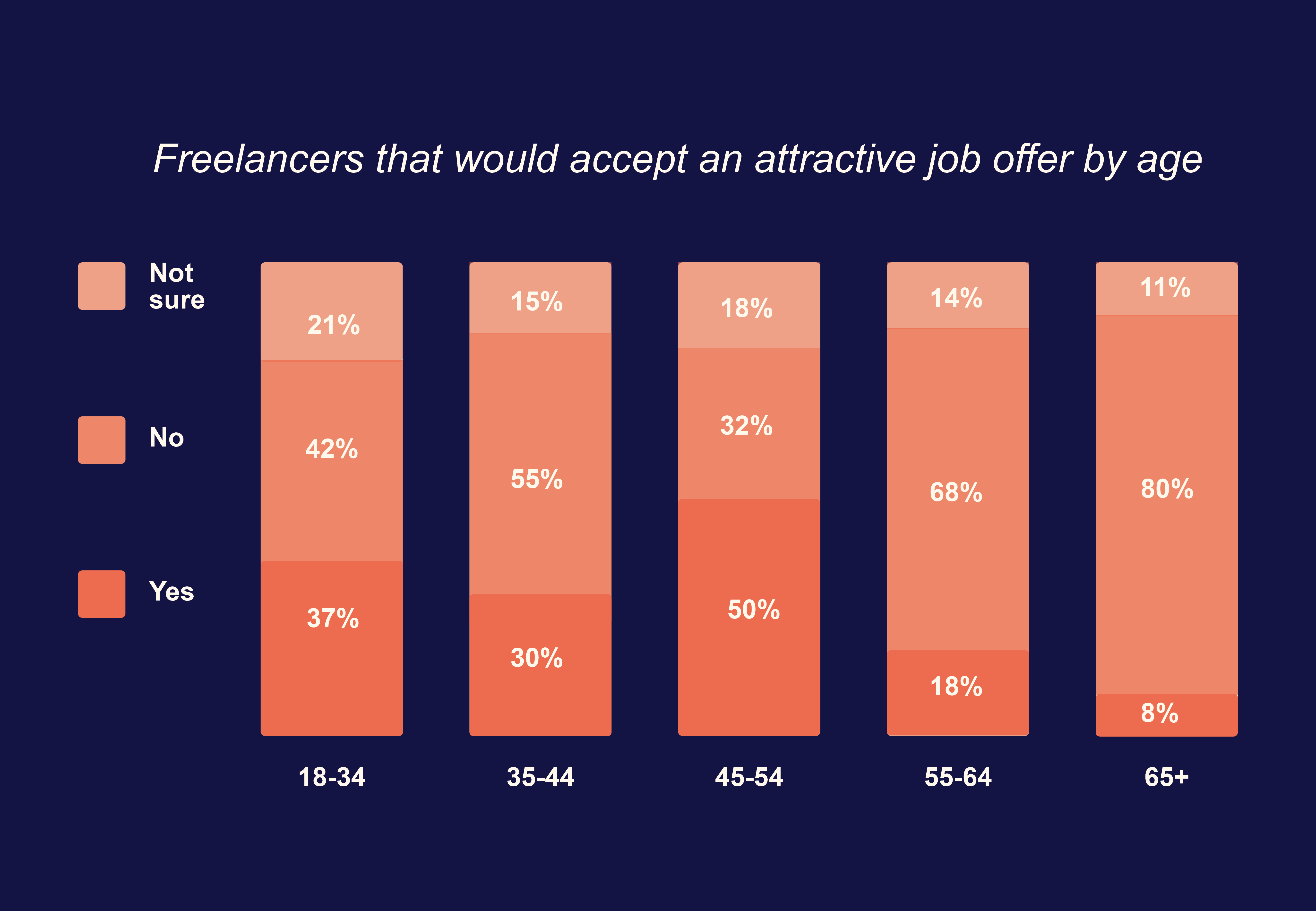 These findings present older freelancers as baby boomers who do not necessarily strive after a ‘traditional’ workday and where younger millennial freelancers are more willing to move towards the traditional route than perhaps expected. Want to get more insight into the freelancer landscape?

Freelancer marketing: The right content to the right lead

As part of our research, freelancers were asked about how they generated leads, which types of business content they used, what type of campaigns were run, as well as how much was do-it-yourself (DIY).

The findings of the report reveal generational differences in lead generation, business content, marketing campaigns and whether freelancers created and ran these campaigns themselves. All of which can be attributed to the varying comfort levels in using technology between the various generational cohorts.

When asked about the types of campaigns they have run, almost half of baby boomer freelancers responded with ‘none of the above.’ Millennials and Gen Z reported greater use of Facebook, YouTube, and other social media campaigns for their business campaigns. 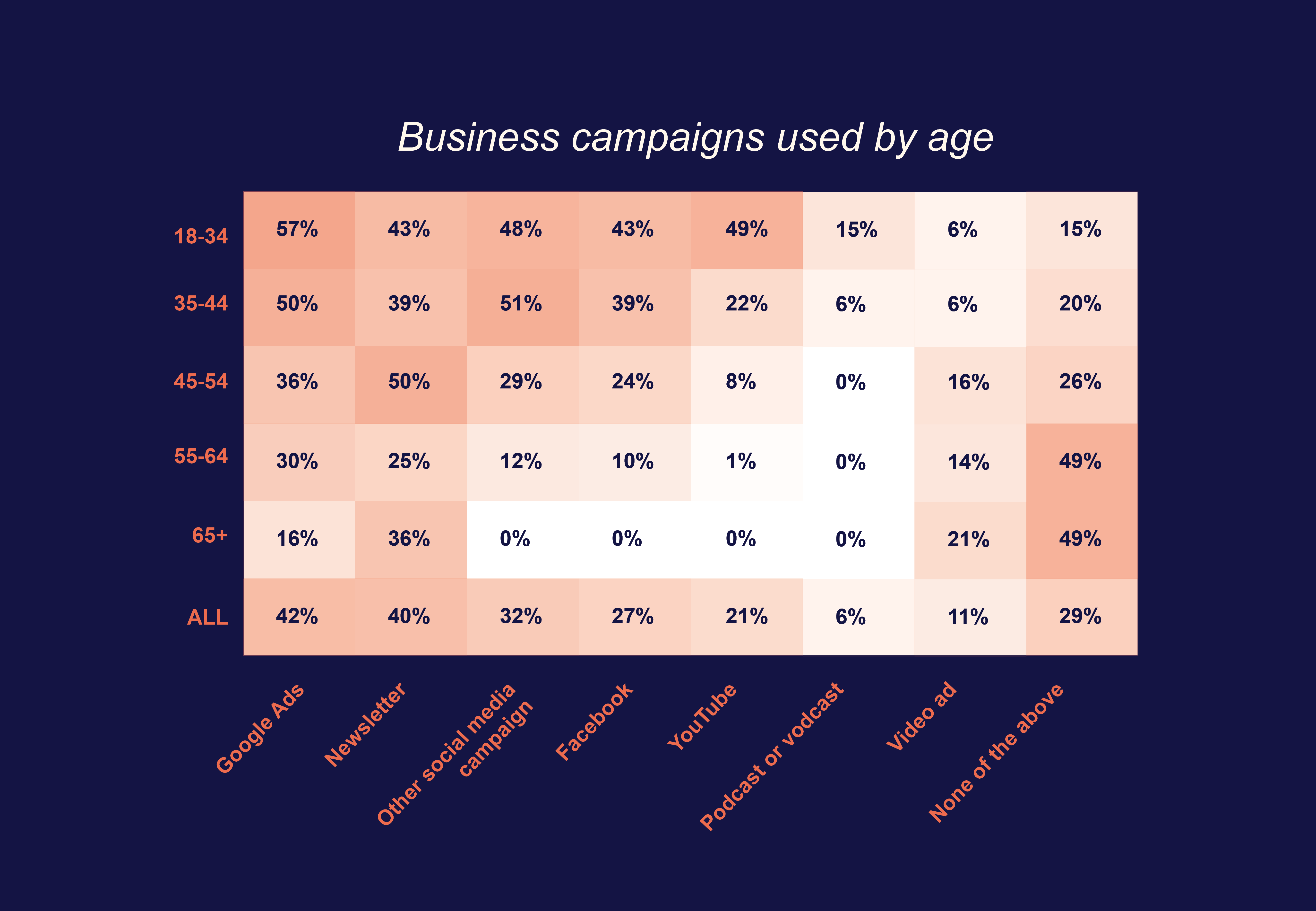 When it came to the types of campaigns run, younger and older freelancers had similar differences to campaign content overall, where younger millennial and Gen Z freelancers used social media campaigns to a greater extent than the older Gen X and baby boomer freelancers.

Read more about how freelancers market themselves here.

So what does this mean for you?

Big businesses and self-employed freelancers alike need to adapt to the changing workforce and continually review what is the right way to get the right message out to their customers.

Are you a freelancer who wants to know how your communication and digital skills stack up compared to other freelancers? Or do you work in the small business industry by selling digital products, assets, or services for small business owners?, then see here how you can help the fastest-growing small business vertical in Europe to grow their marketing presence.

Are you simply just interested in learning more about generational differences in the workforce? Then this report is for you. Get the report here.

Mie Bilberg is the VP of Marketing at Mono Solutions. Mie has a digital and strategic marketing background. Her roots are grounded in media and eCommerce, driven by a passion for customer experience, digital media, and content marketing. Most recently she was Head of Online Sales at Carlsberg Brewery where she launched a global eCommerce platform. Mie is a well-known face among the Danish eCommerce industry as she represents the jury that every year finds the best eCommerce businesses in Denmark. Mie brings experience from start-ups, and marketplaces like Just Eat - takeaway.com. She is the ex-Marketing Director for Metroxpress formerly owned by Tamedia.

Report: Are freelancers
the long-tail channel of the future?