Leading freelancers to new business with a strong digital presence

Any company, no matter the size – be it a lone freelancer or a large enterprise – relies on generating leads and maintaining customers to keep revenue coming in.

What is lead generation? Simply put, the term lead generation is sales and marketing jargon for creating awareness and sparking interest into a company’s products or services.

Freelancers, whether new to the independent workforce or a tenured member, need to make sure that they get the word out about who they are, what skills they bring, and what products and/or services they offer. After all, their salaries directly depend on it.

We have previously addressed the issues freelancers face in marketing themselves and their business in our post The rise of freelancing and personal brand marketing, primarily that freelancers are taking on many new roles and adding many new tasks that they may not have experience doing, including marketing. 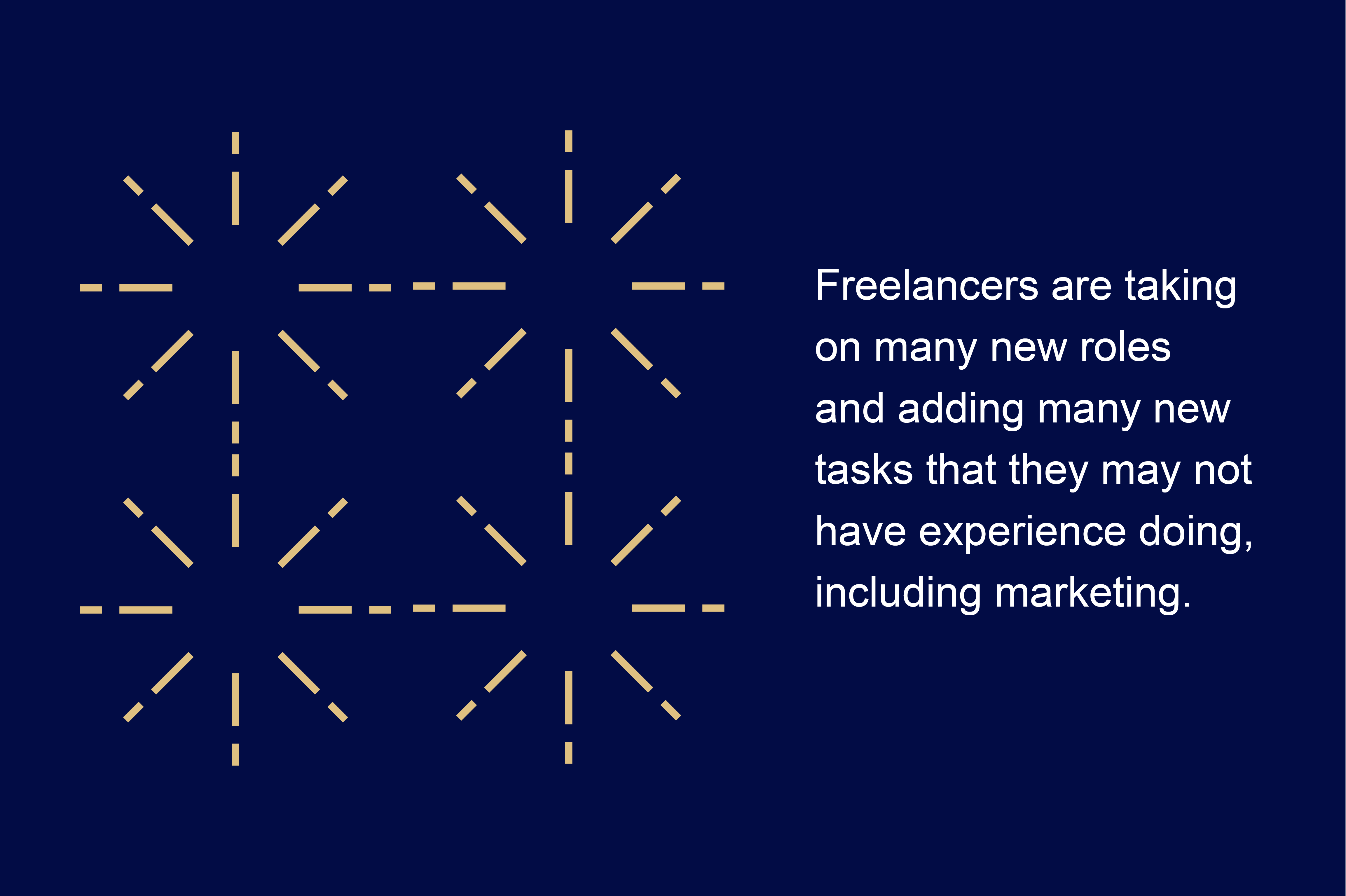 In the same 2019 report from Upwork, “81% of freelancers find freelance business skills important to their work and would like additional training. The top three training areas they would like are: 1. Networking 2. New skills in their field and 3. How to start and grow a freelance career.” Two of the top three desired training areas freelancers are interested in relate to personal branding and bringing in new leads - which have also been influenced by the pandemic.

In Upwork’s Freelance Forward: 2020 report, “24% of all freelancers have had to strengthen or learn how to network in a remote environment” and 20% reported needed to learn how to rebuild their client network.

Yet, while freelancers may need additional help and support in marketing themselves and their brand – especially in this more remote, digital era – there are positives. In Freelancing in America, the report noted that “Among the 96% who say the freelance job market has changed in the past 3 years: 77% say technology has made it easier to find freelance work.”

So how exactly are freelancers generating leads and finding work? We set out to explore the relationship between the freelance market and marketing.

In November 2021, Localogy and Mono Solutions surveyed 298 full-time freelancers in the United States, with the objective to have this research serve as a companion report to our 2021 European study: Are Freelancers  the long-tail channel of the future? The European study surveyed freelancers in the United Kingdom, Germany, and Sweden. For both surveys, we wanted to better understand the freelance market and see what insights we could gather. 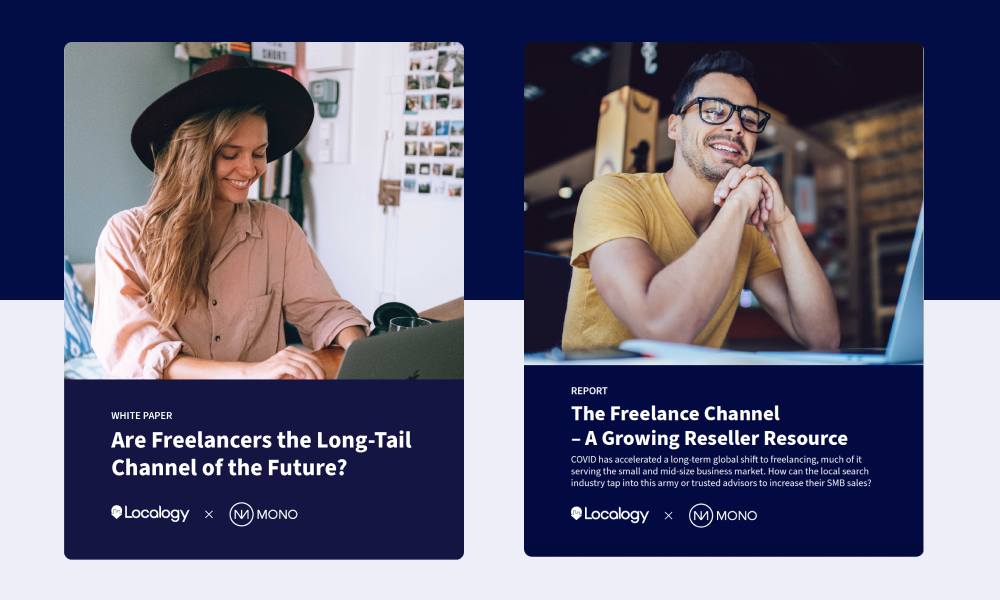 One key area of interest in both the American and European studies was how freelancers market their businesses. Both reports detail which tools freelancers use for marketing, and whether freelancers have a do-it-yourself (DIY) approach to creating marketing content or if they use external providers. While there were many similarities between American European freelancers, there were also a few notable differences.

The age of lead generation

In this digital age, word of mouth still leads as the number one way freelancers get new leads. Of the 298 U.S. freelancers surveyed, 65% report they got new leads this way, topping freelance platforms, job boards, social media, and other digital methods.

Yet, the report showed significant differences between the younger and older freelancers on how much they used word of mouth. Only 32% of freelancers in the 18-34 age bracket used word of mouth compared with 82% in the 45-54 group. This could be due to the fact that younger freelancers are less likely to have as extensive networks as their older counterparts and turn instead to digital avenues to find work. As a result, the report reveals that younger freelancers tend to put more marketing practices into action, diversifying how they are getting the word out. Yet even if word of mouth is a strong source of leads for a freelancer, that positive recommendation may be weakened by a poor digital presence.

So, while these reports do not touch upon the quality of the digital content and presence these freelancers have, they do show that freelancers on both sides of the pond, and across all age brackets, recognize the need for a digital presence on top of word-of-mouth recommendations. While the percentage use of these forms of digital content were quite similar, the willingness to create do-it-yourself (DIY) content notably differed between American and European freelancers. 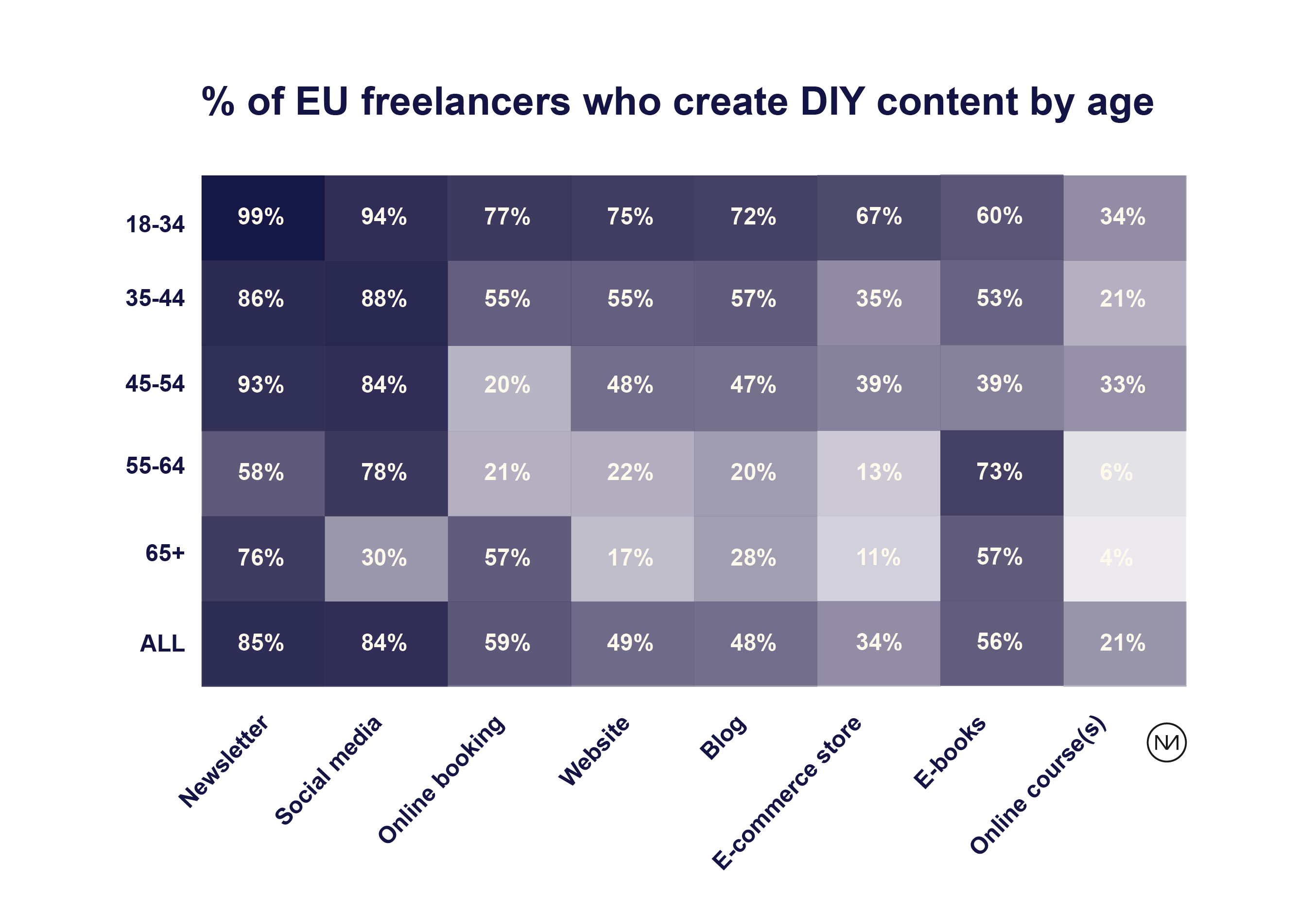 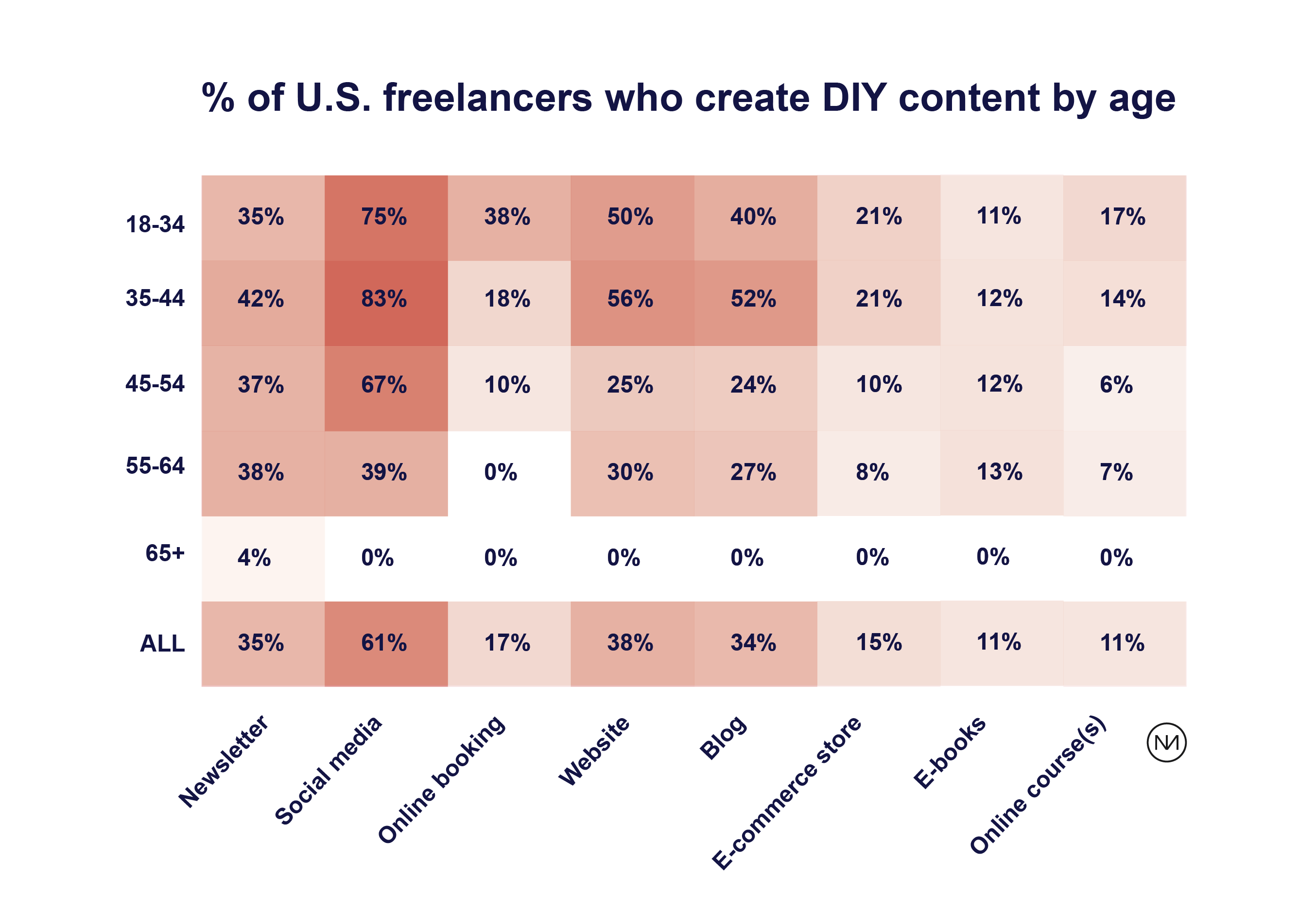 While there were stark differences between freelancers across the pond, the gap is also quite pronounced in regards to freelancers taking charge of running campaigns to market their business.

No campaign, no gain?

In both the American and European studies, the freelancers surveyed had been more likely to create marketing content for their business than running an actual campaign. For the Europeans surveyed, the campaign that most had experience with was a Google Ads campaign (43%), whereas most Americans had run a newsletter campaign (43%).

Other interesting insights include a higher percentage (20%) of Americans had experience creating a video ad compared to their European counterparts (1%) while more Europeans (37%) had run a non-Facebook social media campaign than Americans (26%).

Otherwise, however, there were similarities in the types of campaigns freelancers on either side of the pond had experience with running; with Facebook, YouTube, and podcast/vodcast campaigns showing nearly identical percentages across both reports. 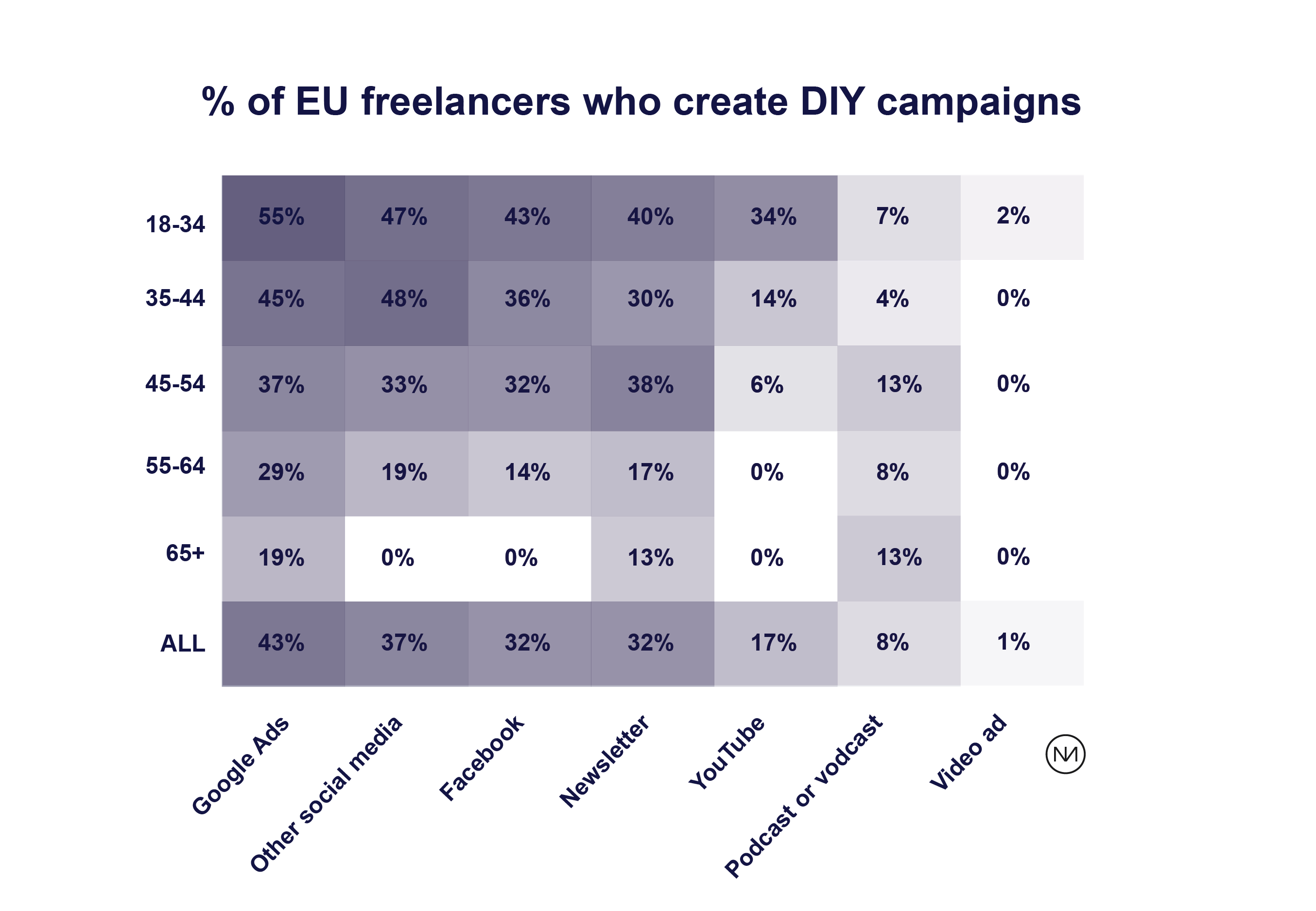 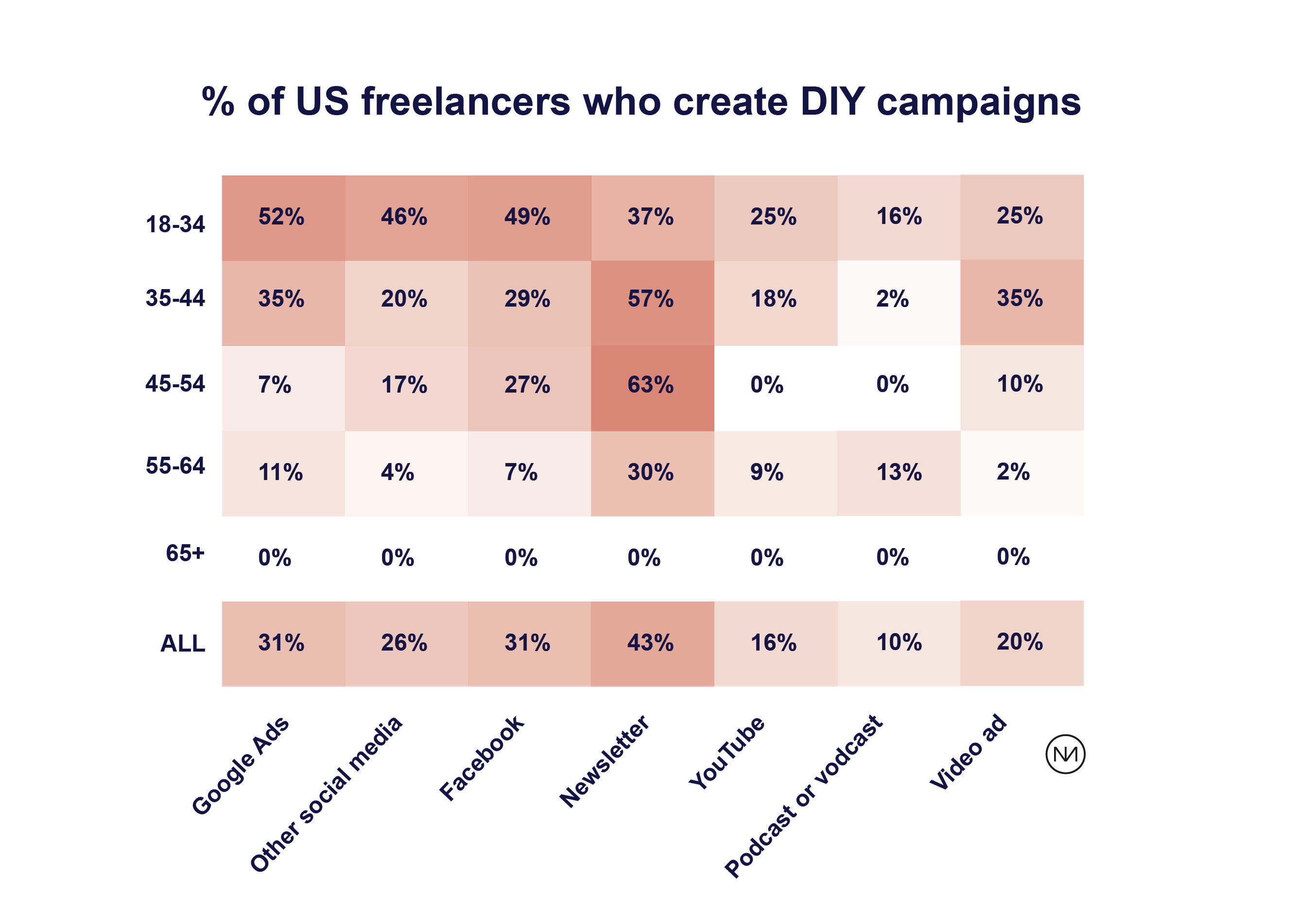 Yet just because a freelancer may not have had the time or opportunity to create or run a campaign yet, does not mean that the interest or desire to do so is not there. So, what does this mean?

If you are a freelancer, how does your business and personal branding stack up to the competition? Like any business, you need to understand the market, review best practices, and promote the strengths of your products and/or services. To know what other freelancers are doing is important to see if you are keeping up – and if not, what areas could be improved. Whether you have the time, skills, or opportunity to run a DIY campaign or not, you can look to digital services providers to see if there is an option to fit your needs. If DIY is not a fit for you, you can explore digital service providers who offer do-it-for-me (DIFM) or do-it-with-me (DIWM) help.

On the other hand, if you are a digital service provider who can help the SME market with products and services to help them more easily create content or run marketing campaigns, then you can better understand your audience(s) and target products and services based on this data. You could target specific types of freelancers based on type of work, age, geographic location, etc., and offer specific tools that may interest them most, or of course, offer different service models to fit the skills, time restraints, etc., of your customers.

With this report, you, as a digital service provider, can better craft how you get the word out about the products and/or services you offer and how these can help freelancers. 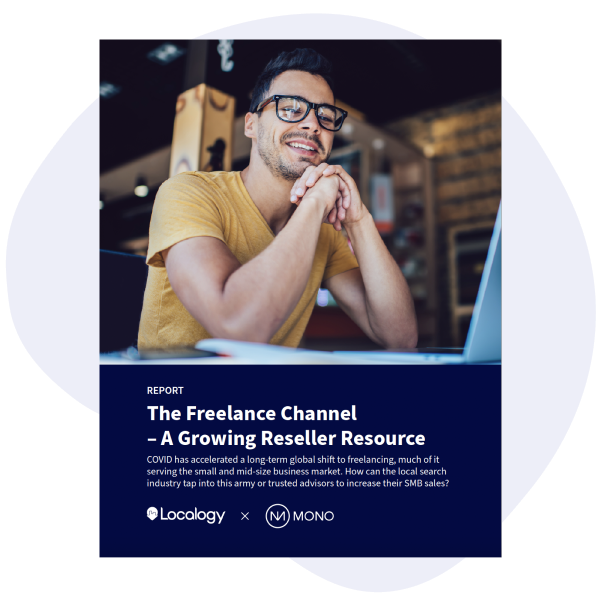